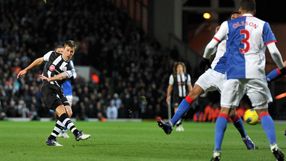 Taylor knows that Saturday's clash could have huge effects at either end of the table, and is wary of Wigan’s characteristic end-of-season form.

"When I was there, we had a great team spirit; we lost quite a few games but we always stayed in the division and hopefully they can do the same again this year," he told Newcastle's official website.

"I think the only year, really, that we didn't have a fight was the first year we came up and we had 40 points just after Christmas.

"But the team spirit they've got there is great. They always seem to hit a little bit of form at the right time and pick up results unexpectedly and that's been the case this season. They've lost to some of the teams around them at home and yet they can go to places like Arsenal and pick up results."

Wigan find themselves only one point clear of safety with Bolton Wanderers, one place below them, having a game in hand on the Latics.

At the other end of the table, Newcastle sit fourth and are fighting for a Champions League spot. The in-form side of the division have taken maximum points from their last six games.

Taylor revealed the reasons behind his former side's decline this year, but admitted he would love to see them remain in the Premier League.