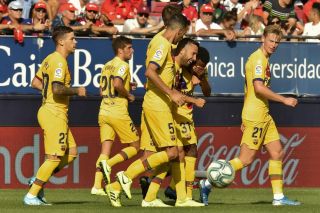 Teenage sensation Ansu Fati scored his first Barcelona goal as the Spanish champions were denied victory by a late penalty in an eventful 2-2 draw at Osasuna.

The 16-year-old Fati was sent on at half-time with Barcelona trailing to Roberto Torres’ early strike and finding little fluency to their game.

Fati was on target within six minutes of his introduction and Arthur put Barcelona ahead before Torres equalised from the penalty spot.

On a sultry evening in Pamplona which saw drinks breaks taken, Barcelona were without injured trio of Lionel Messi, Luis Suarez and Ousmane Dembele.

Segunda champions Osasuna came into the contest high on confidence, with four points from their opening two games and their defence yet to be breached.

There were emotional moments before kick-off as a minute’s silence was in held in memory of the daughter of Luis Enrique.

The former Barcelona player and manager announced on Thursday that his nine-year-old daughter Xana had died after a five-month battle with bone cancer.

Barcelona had plenty of possession but little cutting edge and Osasuna repelled the visitors’ attacks comfortably.

Rafinha went down in the box after an aerial challenge with Osasuna captain Oier, but neither referee Juan Martinez Munuera nor VAR were interested.

Openings were rare but Torres fired over from 35 yards after 38 minutes, and Barcelona ended the first half without managing a shot on goal.

Barcelona sent on Fati at half-time and the teenager made a dramatic impact by beating his marker in the air to head home Carles Perez’s cross.

At the age of 16 years and 304 days, Fati became the third youngest player to score in LaLiga history after Fabrice Olinga and Iker Muniain.

Both sides had chances to go in front as the game opened up, with Brandon and Perez going close.

Barcelona went ahead after 64 minutes when the increasingly influential Perez poked the ball through to Arthur.

Fati was prominent again when his run into the box ended with him falling to the floor.

But penalty claims were waved away as the referee felt he had ran into David Garcia.

Osasuna levelled nine minutes from time after Oier’s cross struck the arm of Gerard Pique and they were awarded a penalty.

Torres kept his cool in the intense atmosphere to send Barcelona goalkeeper Marc-Andre ter Stegen the wrong way from the spot.

Perez might have won the game for Barcelona in the dying seconds.

But his heavy touch allowed Martinez to gather gratefully and Osasuna to claim a deserved point.