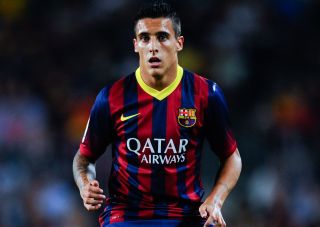 The 22-year-old has struggled to make Gerardo Martino's first team this season and has been linked to a loan move away from the club, with Liverpool and Tottenham reported to be interested in a loan move.

However, Tello has no intention of leaving the club during January although a move at the end of the season could interest him if he continues to sit on the sidelines.

The Spain international made a rare start during Barca's 2-0 win over Getafe in the Copa del Rey on Thursday, and hopes to have done enough to force his way into the reckoning at Barcelona.

"I'll definitely stay at Barcelona until June, then we'll see what happens," he said.

"For me, it would be an honour and a privilege to be at Barcelona for as long as Xavi has. We learn things from him every day and I'm proud to be on the same team as him."

Tello has made 16 appearances this season, but only four of them have been starts as he finds himself on the peripheries of the squad.