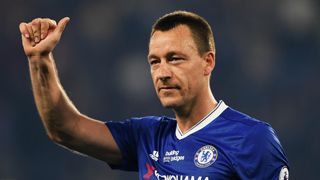 John Terry hopes to return to Wembley as a manager after bringing the curtain down on his Chelsea career in Saturday's FA Cup final defeat to Arsenal.

The centre-back is due to leave Chelsea at the end of his contract in June, but has yet to make a decision on whether he will hang up his boots or continue playing elsewhere.

Regardless of what the immediate future holds, the 36-year-old is desperate to pass on his knowledge and experience by moving into coaching.

"Hopefully one day I will be back at Wembley as a manager, that is kind of the ambition," Terry was quoted by Sky Sports.

"It has been difficult for me actually as a player because I have been looking to do coaching for the last year. Every time we get a day off, you have got a coaching session planned and then you think 'OK, I am going to spend it with the family'.

"The next thing you know, the season has finished and you have kind of missed out on a few sessions and everything.

"But, if I do stop or if I do carry on playing, I will press on in that regardless. I do want to be a manager. I think I have got too much to give and I have learned too much not to pass that on, whether that is initially to a younger generation or eventually at this level.

"Listen, this is the target - being here, managing a top side."