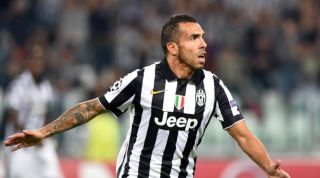 The Juventus striker has not played for his country since their 2011 Copa America quarter-final defeat to Uruguay, apparently due to a personality clash with former boss Alejandro Sabella.

However, Martino - who took over from Sabella after Argentina's World Cup final loss to Germany in July - said earlier this month that he would not be averse to bringing Tevez back into the fold.

Tevez has been in superb form for Juve this season, scoring eight goals in 10 appearances, and Martino has rewarded the 30-year-old with a place in his 25-man squad for Argentina's friendlies against Croatia and Portugal next month.