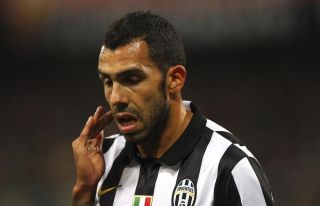 Tevez has scored 36 goals in 72 games since joining the Italian champions from Manchester City in June 2013.

The Argentina international was Juve's top scorer last season as they won Serie A for a third season in succession and is currently their leading marksman this term.

Despite his successes in Turin, Tevez does not plan on a long-term spell in Italy - with a return to boyhood club Boca Juniors reportedly on the cards.

"I said I wanted to fulfil my contract and that's my idea, I'm not thinking of signing an extension because that’s not how I feel at the moment," Tevez told reporters in his homeland.

"As I always said, my idea is to complete my contract. Everyone knows I said so from the moment I arrived at Juve.

"I have a year and a half left on my contract and it's complicated to leave when you're playing well at this level.

"I have to take things calmly and enjoy and not go crazy with the idea of coming back."