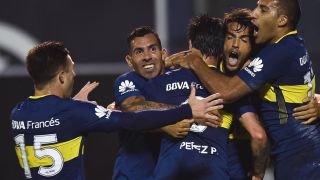 Carlos Tevez intends to retire when his Boca Juniors contract expires at the end of 2019.

The former Manchester United, Manchester City and Juventus striker rejoined Boca for a second time in January, cutting short his stay at Shanghai Shenhua – who reportedly made him the world's highest-paid player.

Tevez has scored just four goals since his return and was substituted as Guillermo Barros Schelotto's side clinched the Superliga title with a 2-2 draw at Gimnasia La Plata last week, with the end now in sight for the 34-year-old.

"I think that when my contract ends at the end of next year I will [retire]," he said on Canal 13.

"Other times, I missed the club when I left, but this time it won't be the same. I won't go to another team and I'll retire with this jersey.

"I don't want to retire and then become a coach or director. I must prepare for such a role first."

Asked about why he does not appear happier at the Boca, Tevez said: "Because when things do not go as you want and you demand a lot of yourself, you do not like it when you are not a protagonist.

"When you do not have that comfort, you will not be smiling. I'll retire at the end of next year."

Tevez won the Copa Libertadores with Boca in 2003 and claimed three Premier League titles – two with United and one at City – as well as the Champions League while playing for the Red Devils.

He also twice lifted the Serie A title with Juventus and was a key member in the first of their historic four successive domestic doubles.