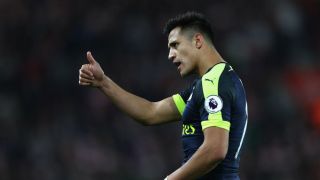 Alexis Sanchez's superb solo strike was typical of the Arsenal star, Arsene Wenger beamed, after the Gunners won 2-0 at Southampton on Wednesday.

Knowing victory would take them to within three points of the top four in the Premier League, Arsenal were slow out of the blocks, but Sanchez combined wonderfully with Mesut Ozil on the hour to score 20 league goals in a season for the first time in his career.

Arsenal will face Stoke City, Sunderland and Everton in their final three games as they look to sneak Champions League qualification for the 20th season in a row under Wenger.

Requiring Sanchez to put speculation over his future to one side in those games, Wenger hailed the Chilean star after a pivotal performance on the south coast.

"That's Alexis," Wenger said. "He's a player who never gives up and is always tricky to stop, he's very good in short spaces. Once he has the ball in the box, he's dangerous.

"Alexis always grows during the game. He's always a slow starter and gets stronger and stronger.

The Gunners had not won at St Mary's in the league since 2003, but the performance could provide Wenger with a template to follow in their closing fixtures.

"I'm very pleased because we had a consistent performance from the first to last minute," Wenger added.

"We were dynamic, quick going forward, well organised. It was a difficult game. We knew in the second half we could score goals. We created more space and overall I think it was a very convincing win.

"We had some chances as well in the first half, but it was a very even game. In the second half we took over and created many opportunities to score."

Wenger's opposite number Claude Puel lamented his side's inferior "clinical edge" to the Gunners after squandering the best chances in a tight first period.

"It's often the same result against the big six, we cannot find the good win against one of these teams," he said.

"Every time we play good football with quality, with opportunities, with chances but without the clinical edge and this is very harsh for the players.

"It seems we had all the good situations in the first half, but second half for them just one situation is enough to score and this is difficult to accept."