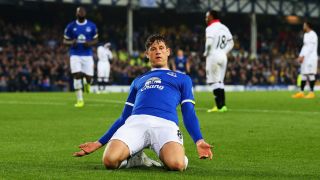 Everton manager Ronald Koeman praised Ross Barkley for his match-winner in his side's 1-0 victory over Watford.

Barkley drilled in a 25-yard effort for the game's only goal early in the second half at Goodison Park on Friday.

The midfielder's future was heavily discussed in the lead-up and Koeman was pleased with his contribution.

"In the first half we also had opportunities like this but we needed to play a little bit faster.

"Left and right, Ross is a player with a good shot. We need more productivity from midfield and our attackers, but he showed today what we like to see."

"Very unlucky, very unfortunate. We didn't deserve to lose, we deserved at least a draw," the Italian told Sky Sports.

"In the first half and before their first goal we had chances with [Daryl] Janmaat and [Troy] Deeney, but the ball didn't go in.

"Everton after the break they had one shot and one goal, so I'm very happy with the way my team played."