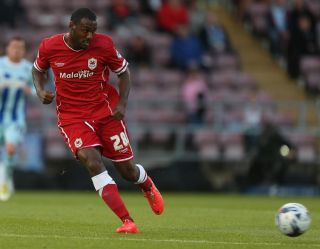 The Ligue 1 outfit will also have the option to buy the defender at the end of the 2014-15 campaign, with Cardiff ready to offload the player after just one season in the Welsh capital.

Theophile-Catherine, who arrived on a four-year deal from Rennes for a reported £2.1million last September, made 28 Premier League appearances for Cardiff before their eventual relegation to the Championship.

And the 24-year-old revealed his excitement at returning to France.

"I am very happy to arrive at the ASSE," he told the club's official website. "ASSE is a great club, a legendary club.

"Many people in my family are fans of Saint-Etienne, I'll have the pressure at home

"I cannot wait to experience the atmosphere of Geoffroy-Guichard.

"When the opportunity to return to France - especially at Saint-Etienne - presented itself, I did not hesitate."