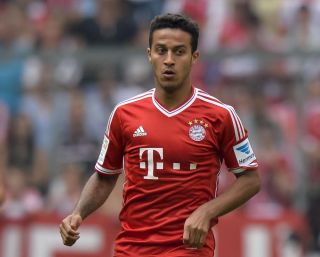 The 22-year-old midfielder suffered the injury in the 25th minute of their 3-3 draw at the Allianz Arena last month and was expected to miss six to eight weeks.

However, the Spain international has made good progress in his rehabilitation and could make a return before the end of Bayern's season.

Thiago's return will be a boost to Pep Guardiola but it will be Spain coach Vicente Del Bosque who is most excited to hear the news with the midfielder back in contention for the FIFA World Cup in Brazil.

"The Spanish international has resumed training four weeks after suffering a partial ligament rupture in his right knee.

"The plan is to increase intensity levels over the next few days. If all goes well the 23-yearold may be able to make an appearance in the run-in."

Thiago arrived at Bayern at the start of the season from Barcelona, and has made 28 appearances in all competitions, scoring five goals.