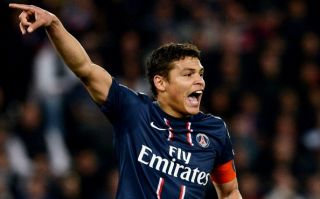 The PSG captain - who also skippers his country Brazil - has been linked with Barcelona throughout the close-season, but has now quashed talk of a departure from the Parc des Princes.

"Rumours? I have a four-year contract with Paris Saint-Germain and I will respect this," the 28-year-old told Globoesporte.

"The season will start as the last one ended. I'll wear the jersey of Paris.

"The coach (Laurent Blanc) has set me free so I can enjoy my vacation (after the FIFA Confederations Cup), but count on me for the Trophee des Champions against Bordeaux on August 3.

"He asked me if I wanted to come back sooner, and I want to resume July 30."

Silva, who joined PSG from Milan in 2012, was instrumental in the club's first Ligue 1 title win since 1994 and appears set to lead the defence of their crown in 2013-14.