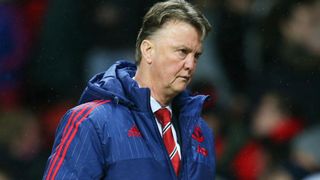 Things are getting worse at Manchester United under Louis van Gaal, according to their former forward Michael Owen.

United ended 2015 with a run of eight games without a win - the club's worst run in over 25 years.

Van Gaal's side have been branded "boring" this season with an average of just 1.2 goals per game, which is their worst record since the Premier League began in 1993.

And Owen, who spent three seasons at United under Alex Ferguson, said things are not getting better under Van Gaal.

"It is getting worse [under Van Gaal]. It is certainly not getting better," Owen told talkSPORT.

"People are surprised at how bad they have been playing but we have been covering them on the television for some time now and that was a normal performance against Sheffield United [in the FA Cup].

"You go to Old Trafford and you are not entertained like you used to be. And that is a serious problem when you are a club like Manchester United.

"The players are virtually being strangled in many ways. When you have got two full-backs that hardly venture forward, you have got two big sitting central midfield players that really don’t offer much going forward and you have got your two centre-halves and your goalkeeper, you are talking seven players straight away that are in there to be defensive-minded.

"Then you are asking four players to go and try and break down 11 and it is virtually impossible.

"It is literally four players against a team and it is difficult for anyone to get any space or any chances."

United are fifth in the league table and Owen believes a top-four finish will be difficult.

"Finishing in the top four is going to be a struggle looking at the results since Van Gaal took over," he said.

"The players are probably hating every minute of it. It is no fun for anyone at the minute. It is really tough to watch for the fans, for the players and even Louis van Gaal must be bored watching it."

Watch Newcastle vs Manchester United in the Barclays Premier League live and exclusive on BT Sport 1 from 7pm on Tuesday, January 12. Visit btsport.com for more info