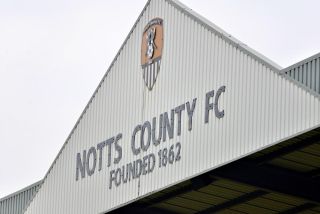 Notts County have been relegated from the Football League for the first time in their history after a 3-1 defeat at Swindon on Saturday.

Here, Press Association Sport takes a look at some things you may not know about County.

Formed in 1862, Notts County was universally recognised as the oldest Football League club. Although its official formation followed two years later as the ‘Notts. Foot Ball Club’. In 1888, the Magpies became one of 12 founder members of the Football League, having previously played a game of its own devising rather than association football. If County are relegated, the mantle of oldest Football League club passes across the River Trent to Nottingham Forest, who were founded in 1865. Some claim it is Stoke but even the club’s own website admits “many details remain sketchy” about their formation, purported to be in 1863.

The Italian giants never forgot the gesture with the shirts and remembered their roots when it came to the inaugural game to open their new stadium in September 2011. Juve could have opted to play Real Madrid or Barcelona or Manchester United, but Notts County were invited due to the 108-year link between the clubs since the ‘Old Lady’ decided to adopt the black and white shirts worn by the Magpies. The match to celebrate the opening of the 41,000-seater Juventus Arena, which is built on the site of the Stadio delle Alpi, ended in a 1-1 draw after Lee Hughes cancelled out Luca Toni’s opener late on.

Tommy Lawton, Howard Wilkinson, Neil Warnock, Sam Allardyce and Sven-Goran Eriksson have all managed Notts County, but Sirrel is widely regarded as the club’s most successful boss. Sirrel led the Magpies from the depths of the old Fourth Division to the top tier, announcing their arrival on the opening weekend of the 1981-82 season by winning away against the champions Aston Villa. Stories of Sirrel’s off-pitch antics are also intriguing, like how he used to lick the top of the sauce bottle clean during team dinners or travelling from his home in the village of Burton Joyce to use the communal bath.