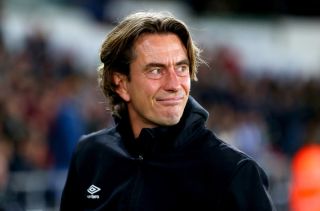 Watkins took his tally for the season to 10 as the Bees stormed to a third consecutive win.

He drifted between centre-backs Grant Hall and Toni Leistner to head home a first-half opener and netted again in the final seconds.

Hall had equalised early in the second half but Said Benrahma put the visitors back in front with a penalty just before the hour mark.

Watkins has been outstanding since being deployed as an out-and-out striker following Neal Maupay’s summer departure for Brighton.

“I can only praise him for his work ethic – look how hard he works throughout the game,” said Frank.

“That’s a massive, big thing for us. We were pressing high constantly in the second half – chasing everything and keep on pushing up. His focus is on developing and wanting to get better.

“We’ve been working very hard with him to stay on the last line. The first goal was a clear example of that – we want him in between the two centre-backs. He’s doing that very well.

“I thought it was a clear, clear win. We had a lot of opportunities to score the 3-1 goal and we scored it in the end.”

Brentford have real momentum after recovering from a stuttering start to the season but Frank insisted they cannot afford to get carried away.

He said:  “Everybody in this league has big dreams and we also have big dreams, but we know it’s so important to keep humble and keep working extremely hard.

“There are loads of things we can still improve. I’d like us to control the game even more.”

The former Bees boss, whose side would have gone second had they won, was incensed that Josh Scowen was adjudged to have fouled Bryan Mbeumo.

“It was lost on a big decision, let’s be really clear,” Warburton said.

“We deserved to go in at half-time 1-0 down. We had to step up the tempo and move the ball better in the second half – and we did.

“We got the equaliser, were in the ascendancy and I was really confident at that point.

“Then that decision changes everything. You have to be really sure if you’re going to give a call like that – make sure you’re 100 per cent.

“I think you’ve seen the replays I’ve seen. I think I’ll let you describe it because I might get fined if I describe it appropriately.

“We were in good shape and I’m frustrated beyond belief to see a game change in that manner over that type of call.

“You see Josh go to make the challenge. He then pulls his left leg back, puts his hands up and the guy (Mbeumo) is already in the air.”