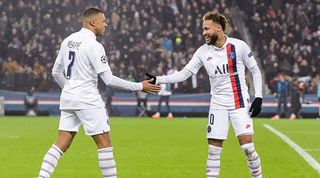 PSG manager Thomas Tuchel has denied reports that he has fallen out with star men Neymar and Kylian Mbappe.

Mbappe was visibly frustrated after being substituted in the second half of Saturday's 5-0 victory over Montpellier.

The 21-year-old was seemingly keen to stay on the pitch to try and add to the 22 goals he has scored in all competitions this season.

Meanwhile, Tuchel did not attend Neymar's birthday party on Sunday, with some supporters criticising the Brazilian for holding the event two days before a game.

However, the PSG head coach has dismissed reports of a row between himself and the club's two highest-profile players.

“Is it the best way to prepare for a match? No, clearly not,” Tuchel said of Neymar's party. “Is it the worst thing in the world? No.

“We must be clear. I decided to not attend Neymar’s birthday. That was my choice. It was not against him – it was the best thing to not be there."

And Tuchel does not believe that Mbappe's adverse reaction to being taken off on Saturday will lead to the Frenchman seeking a departure from the Parc des Princes.

"I can't think that Mbappe might use this situation as a reason to leave the club," he said ahead of Tuesday's trip to Nantes.

"He is one of our players, he has a contract. I took that decision and this is the coach's job.

"It's not personal between us. It's just a thing between a player who doesn't want to be substituted and a coach who has reasons to do so, because he has players on the bench who need and deserve to play.

"The problem is there are cameras, fans, journalists, and a lot of people want to talk about it. This is why I was sad. There were a lot of positive things to talk about on the pitch.

"I talked with Leo [Leonardo, PSG's sporting director], as we usually do, at 11, after the game. But it will be between us and the staff, it stays in the locker room.

“There is no crisis. Personally, I am not annoyed. I am a coach and Kylian and Neymar are both top players. You have to handle players as part of a strong team, not a divided one.

“I am not angry with either of them. There are times when a relationship between the player and coach is easier, but that is normal.”