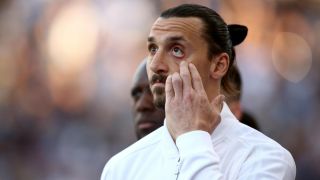 David Beckham cheekily reminded Zlatan Ibrahimovic of his obligation to wear an England shirt at Wembley after the Swede lost their World Cup bet.

The pair put pride on the line with a wager on the outcome of their nations' quarter-final clash in Samara on Saturday.

Beckham promised to take Ibrahimovic shopping at IKEA if Sweden won, so long as the LA Galaxy striker agreed to eat fish and chips at an England home international in the event of a victory for Gareth Southgate's side.

And with Harry Maguire and Dele Alli giving England a 2-0 win and a spot in the semi-finals, Beckham did not miss his chance to poke fun at Sweden's all-time top scorer, photoshopping the self-styled 'lion' into the Three Lions' own 1998 World Cup kit.

Zlatan Ibrahimovic lost the bet!It looks like he's heading to Wembley with David Beckham.Get the shirt on order.The fish and chips can probably wait, though...July 7, 2018