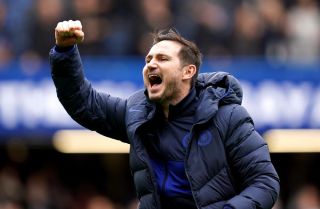 It was the pupil against the teacher as Frank Lampard’s Chelsea took on Jose Mourinho and Tottenham at Stamford Bridge.

Lampard got the bragging rights as the Blues won 2-1, securing a league double over Mourinho’s Spurs, in what looks like being a pivotal result in the race for the top four.

Here, the PA news agency looks at how the two managers fared.

Lampard must wish he could come up against his former boss every week as he has now played three games against Mourinho and won three. The first meeting came at their respective former clubs last season as Derby knocked Manchester United out of the Carabao Cup and then Lampard pulled off a real tactical coup over Mourinho in this season’s reverse fixture by outsmarting the Portuguese in a 2-0 win in north London. The scoreline was the same at Stamford Bridge as Chelsea made a big statement in the race for the top four with a goal in either half from Olivier Giroud and Marcos Alonso.

Mourinho said before the game that he had been told Chelsea were going to play with a back three and his anonymous sources proved spot on. Lampard adopted that formation in the reverse fixture in December, but he has not used it since the game at Arsenal. Knowing how his former player was going to line up perhaps swayed Mourinho’s thinking as he matched Chelsea’s formation, playing three central defenders of his own.

Mourinho may have brought three Premier League trophies to Chelsea over two spells, but his popularity with the fans has waned since his 2015 exit, to the point where they now sing derogatory songs about their former manager. The Portuguese admitted before the game that returning to Stamford Bridge, which was a real fortress for him, is not special anymore and the only good thing about going back is there that he can walk home. He did at least get a warm reception from Lampard before kick-off as the pair shared an embrace.

The irony of Tottenham’s 5-4-1 out-of-possession formation should not be lost on anyone. It was sixteen years ago when Mourinho coined the famous term ‘park the bus’ when Jacques Santini’s Spurs came and played a similar system and eked out a 0-0 draw. If Mourinho was hoping for a similar result here, then the gameplan was busted inside 15 minutes as Giroud opened the scoring. With no fit recognised strikers at the club, Spurs had little by the way of a route back into it. After Alonso doubled the lead they briefly gave themselves hope in the 89th minute with the flukiest of own goals.