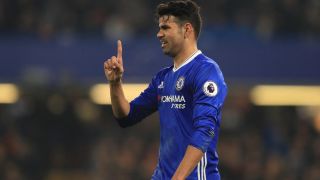 Costa, 28, was heavily linked with a Chinese Super League (CSL) switch in January, but eventually stayed with the Premier League leaders.

Recent reports suggested that move could be back on at the end of the season in what would be a lucrative deal.

But Tianjin denied the speculation in a statement, saying: "With regard to the widespread rumours that Chelsea's Diego Costa is expected to join Tianjin Quanjian, our club want to clarify that so far, we have not been communicating with Diego Costa regarding the transfer."

Costa has scored 19 league goals this season, helping Chelsea open up a four-point lead atop the table.

The Spain international is contracted until mid-2019 at Stamford Bridge, but a big-money offer from China could see him make the move.

Tianjin are coached by Fabio Cannavaro and have the likes of Alexandre Pato and Axel Witsel in their squad.

They sit ninth early in the CSL season after winning just two of their opening seven games.