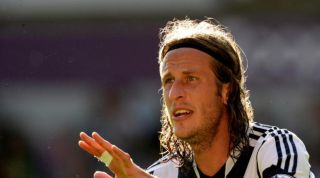 The Sweden defender thinks the time is right for the Premier League outfit to make a significant tilt at winning either the League Cup or the FA Cup.

West Brom host fourth tier side Oxford United in the second round of the League Cup on Tuesday.

And the club's strength in depth could be the trigger for a push for silverware, according to Olsson.

"It is always nice to play games," he said.

"I think we have a depth in the squad to deal with both the Premier League and the cups so hopefully this season we can have a good cup run.

"We haven't had one in a few years and a team like us should really try and approach the cups in a professional way.

"You have seen in the past that there are teams who are a similar size as us have got to Wembley in their past and even won the title.

"We should approach the competition professionally - starting on Tuesday."

West Brom have been knocked out in the third round of the League Cup for the last three seasons.

Alan Irvine's side have drawn their first two matches of the Premier League campaign against Sunderland and Southampton.