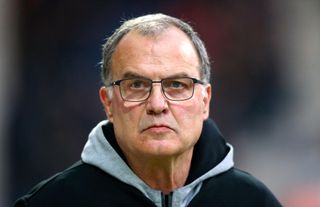 Leeds are ready to activate their option to extend Marcelo Bielsa’s stay at Elland Road for another year.

But the 63-year-old Argentinian gave no guarantees over his future after his side’s heartbreaking Sky Bet Championship play-off semi-final defeat to Derby.

June 15, 2018: Leeds made Bielsa the Sky Bet Championship’s highest-paid manager when appointing him as Paul Heckingbottom’s replacement. The Argentinian shook hands on a three-year agreement, with the club having the option to extend his stay at the end of each year.

September 18, 2018: Bielsa’s side set the early season pace in the Championship. An eight-game unbeaten run, including wins over Stoke, Derby, Norwich and Preston swept them to the top of the table, three points clear of second-placed Brentford.

December 23, 2018: Kemar Roofe’s last-gasp winner at Aston Villa ensured Leeds were top at Christmas and three days later the striker scored twice more in stoppage time to sink Blackburn. Despite a home defeat to Hull three days after that, they ended the year in pole position ahead of Norwich.

The EFL has finalised its investigations into the incident at Derby County’s training ground on Thursday 10 January.— EFL (@EFL) February 18, 2019

January 11, 2019: Leeds moved five points clear at the top, but their home win against Derby was overshadowed by the ‘spygate’ saga. Leeds officially apologised, but Bielsa later admitted he had sent someone to spy on every team he had played.

February 18, 2019: The English Football League fined Leeds £200,000 and gave them a severe reprimand after completing their investigation into spying. The club avoided a points deduction, while Bielsa revealed in May that had he paid the fine out of his own pocket.

April 19, 2019: Leeds’ automatic promotion hopes were dealt a huge blow as they lost 2-1 at home to 10-man Wigan and three days later slumped to a 2-0 defeat at Brentford. A three-point cushion over Sheffield United in the race for a top-two finish was turned into a three-point deficit with two games to go.

April 28, 2019: Bielsa ordered his players to let Aston Villa score an uncontested goal as their final home game of the regular season ended in bizarre fashion. Villa’s players had stopped, expecting the ball to be kicked out of play as Jonathan Kodjia lay injured, but Mateusz Klich took advantage to score and after all hell let loose at Elland Road, Bielsa instructed his side to let the visitors walk in an equaliser.

May 15, 2019: Leeds blew their second chance to win promotion. Having won the first leg of their play-off semi-final at Derby 1-0, they squandered a 1-0 lead in the return at Elland Road to lose 4-2 on the night and 4-3 on aggregate and face a 16th season outside the Premier League.