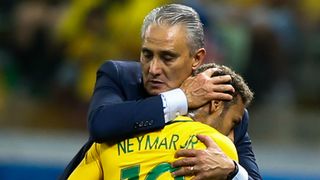 Tite acknowledged Brazil are one of the favourites along with France and Germany to win the World Cup next year after the five-time champions completed qualifying with another victory.

Having already qualified for Russia 2018, Brazil wrapped up their CONMEBOL fixtures by accounting for South American champions Chile 3-0 on Tuesday.

Gabriel Jesus scored a brace, while Paulinho was also on target in Sao Paulo as Brazil finished 10 points clear of nearest rivals Uruguay.

"Brazil are a favourite at the World Cup," Head coach Tite said when asked if his side are in contention for the title in Russia.

"By the football presented, the campaign completed, by level, performance plus results… Brazil are one of the teams, yes.

"I have said that France are at a very strong level too. Rising players like [Kylian] Mbappe, [Alexandre] Lacazette, [Antoine] Griezmann. Look at the offensive trio.

"And there is also world champions Germany."

"Today in Brazil, Tite is very distant from all Brazilian coaches because of his way of understanding football," Alves added. "Because of the way he cares for people, it's very different."

Outside of the qualifying positions in sixth spot prior to kick-off, Argentina ended the day in third thanks to Messi's three-goal haul in Tuesday's 3-1 victory over Ecuador.

"And it's not only one game that defines the team. It's a sequence of regular matches.

"Perhaps Argentina have been benefited by the talent of Messi. His quality... there's no news on talking about Messi's talent."