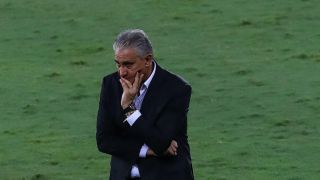 Brazil head coach Tite lauded his players' technique and temperament as they tightened their grip on the CONMEBOL World Cup qualifying section with a 4-1 win over Uruguay.

Edinson Cavani's 40th goal in international colours gave the hosts a ninth-minute lead from the penalty spot in Montevideo but Brazil responded in style, with Guangzhou Evergrande midfielder Paulinho an unlikely hat-trick hero.

Barcelona superstar Neymar was also on target with a delightful lob, leaving Brazil seven points clear of second-placed Uruguay at the top of the qualifying group

"To play here and win here in Uruguay is a very difficult thing. Here you have a really strong atmosphere, energy," Tite said.

"You have to have your highest focus. You have physical, technical, tactical and mental aspects.

"If you come here and get shy to act, to show your game, or if you feel shy to be defensive, because of the pressure from the fans, for instance, you won't play well.

"So mentally the squad must be strong. More so if you go down 1-0."

Uruguay were without Neymar's club-mate Luis Suarez through suspension and Tite conceded this had an influence on Uruguay's 14-match unbeaten run in home World Cup qualifiers coming to an end.

"I am also aware that Uruguay lost power without Suarez, I'm aware of that," he added.

"With that ball up front, the way he arrives, they lost that. But it doesn't diminish the level of my squad."