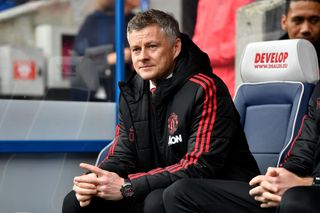 Ole Gunnar Solskjaer admitted it would be “miraculous” if Manchester United were among the sides challenging for the Premier League title next season.

It has been a chastening campaign for a side that finished runners-up to Manchester City last term as a modest start under Jose Mourinho left United well adrift of the front-runners before the turn of the year.

United were initially rejuvenated when Solskjaer replaced Mourinho, winning 14 of the Norwegian’s first 17 fixtures at the helm, but their progress has stuttered since then.

As if you needed reminding…#PLpic.twitter.com/JorY1uF9rM— Premier League (@premierleague) May 9, 2019

Irrespective of their result against Cardiff in their final game of the season, United will miss out on a top-four finish and Solskjaer knows his side have some catching up to do on their rivals.

Solskjaer, whose side are 29 points behind league-leaders City, said: “Challenging for the title next year would be a miraculous season because we are so far behind at the moment, points-wise.

“It’s not like when I used to play that it was us or Arsenal that were going to win the league, and then Chelsea came.

“Now it’s a very, very competitive competition and we’re challenging against the best teams in the world for these trophies. That tells us that it’s going to be a great challenge. We want to get back to where we used to be.

“Next season, we’ve got to close that gap. If we manage to get to February or March and being close then that’s fantastic.”

Solskjaer received a boost on Friday morning when it was announced Mike Phelan would remain his assistant after signing a three-year contract.

Phelan, who served as Sir Alex Ferguson’s number two at United before departing shortly after the Scot in 2013, returned to the club alongside Solskjaer in December last year.

We are delighted to announce the appointment of @Mike_Phelan_1 as our new assistant manager. #MUFC— Manchester United (@ManUtd) May 10, 2019

The United manager said: “He’s fantastic at his job as assistant manager so I’m very pleased it has finally been agreed.

“When Ed (Woordward, United’s executive vice-chairman) rang me (in December) that was my first port of call to assist me and we’re here now for a few years together.

“Players really respect him, they know what he can do and he’s worked with the best. I’m a young manager and Mick’s got more experience in a few more areas than I have.”

Solskjaer is reportedly set to overhaul his squad this summer, though he was coy when asked whether the Bluebirds fixture would serve as a farewell for some players.

He said: “You never know in football, it might be your last game but it might be the start of some careers as well. We had some young players knocking on the door all season and we’ll start with one or two of the kids as well.

“This summer will be also about players that can last here for many years.”

One player who has been linked with arriving at Old Trafford is 21-year-old Swansea winger Daniel James.

However, when pressed specifically on James, Solskjaer said: “I can’t comment on every single individual.

“There are many players. I don’t like when other managers talk about my players and I wouldn’t talk about any others, even if I wasn’t or was interested.”

Preparing for our final game of the campaign.#MUFCpic.twitter.com/3lX4FgBSPn— Manchester United (@ManUtd) May 9, 2019

Club captain Antonio Valencia looks set to play his last game for United on Sunday afternoon and Solskjaer revealed there are plans to give the Ecuadorian a celebratory goodbye following his 10 years of service.

Solskjaer said: “He’s not been fit for this five months that I’ve been here unfortunately. He’s really struggled.

“But he feels that he can play a part and I hope that he gets through today and tomorrow and we can give him a nice send-off because he’s been a fantastic servant to the club.”