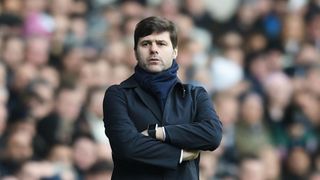 Tottenham head coach Mauricio Pochettino says he will not yet entertain the prospect of a Premier League title challenge following Saturday's 4-1 win over struggling Sunderland.

After a draw at Everton and a midweek defeat to Leicester City, Spurs fell behind to a Patrick van Aanholt goal at White Hart Lane before Christian Eriksen levelled just 91 seconds later.

Mousa Dembele put Spurs in front before the hour, with Eriksen adding a second prior to Harry Kane's penalty late on.

Amid suggestions Spurs can challenge for the title, it was put to Pochettino that he could perhaps begin to consider the prospect after another seven games.

The Argentinian, also quizzed on the subject of January transfers, told BT Sport: "We will see, we will see in seven games.

"I think not too many [transfers]. In the squad, we have the quality and good balance. If we can add players to improve us then we are open to that. It's always like this in football but it's not easy.

"The squad have balance and energy, there is a fantastic atmosphere in the dressing room and that's important to keep."

Spurs were on top for large spells against a Sunderland side who sought to stay deep and remain difficult to break down, with Pochettino particularly pleased by his side's response to falling behind.

"We created a lot of chances but we gave Sunderland the opportunity and they scored, but we reacted quickly," he added.

"I am very pleased with the performance again, and in the last few games, but this time it's a different result. It was a great effort from the players.

"It was difficult to create space and we needed to fix some problems at half-time. The performance was good and it was a reaction after the Leicester defeat.

"The second half was good and we had capacity to score more than we had. In the end we deserved it."