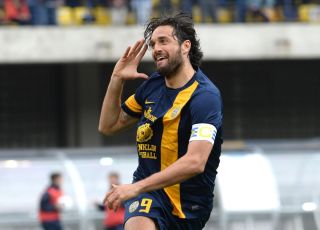 Toni, who turns 37 in May, netted two first-half goals on Sunday as Verona cruised to a 4-0 home win over rock-bottom Catania.

The forward moved to Verona on a free transfer from Fiorentina in July and has been a hit at his new club, with his latest double taking him to 20 goals in 31 Serie A appearances.

After moving level with Torino's Ciro Immobile, Toni thinks he could become the league's top scorer and is motivated by the club's push for European football.

Italy's continental spots are usually limited to five but sixth – a place Verona are challenging for - should also provide a berth in the UEFA Europa League with Coppa Italia finalists Napoli and Fiorentina set to finish in the top five.

Toni told Sky Sport Italia: "I didn't believe I could win the Capocannoniere (golden boot) award this season, but now I am on 20 goals with Immobile and it would be something extraordinary at my age.

"I haven't scored a hat-trick yet this season and wanted to do that so I could give the match ball to my daughter.

"I am a striker, I really care about goals, but it's over now and I'm focused on the next game.

"Verona have nothing to lose in the race for Europe and (we have) three tough matches coming up.

"We'll be fired up and know we can make history. We'll see where we are in three weeks."

Toni also said he had acknowledged he would not feature at this year's FIFA World Cup.

The forward, who played a part in Italy's 2006 World Cup win, was not involved in Cesare Prandelli's 42-man training camp in Coverciano earlier this month.

"I don't need to send Cesare Prandelli any messages," he added.

"He named his larger squad without me or Francesco Totti, so everyone has to just accept it and stop going on about this."