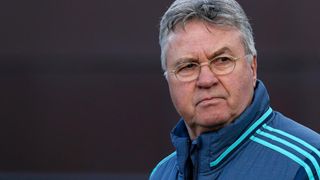 Chelsea were two places and a point above above the relegation zone following Mourinho's final defeat at Leicester City, with the top four 14 points away.

But the reigning champions are yet to lose a domestic match under Hiddink and the eight-point gap to Manchester City and Manchester United in fourth and fifth appears bridgeable, particularly in light of City's floundering league form.

A repeat of the FA Cup success from when Hiddink replaced Luiz Felipe Scolari in 2009 is also possible, with a quarter-final at Everton coming this month, but the 69-year-old believes restoring Chelsea to the upper reaches of the Premier League would be a bigger feat.

Victory over Stoke City on Saturday would lift Chelsea above their seventh-placed opponents and Hiddink said: "Would getting the top four be a better achievement than the first spell? We are looking far ahead now, but considering [where we were] looking backwards, it might be a bigger achievement, yes.

"The players responded well when I came in. I said to everyone 'what was your contribution in the year of the championship and also the last half year?'

"'Don’t give me an answer by word but in training and in upcoming games.' I think they responded.

"They took responsibility and they started to get some results with draws and later on with victories.

"We were not hoping they would respond we were expecting because they have shown it in the past."