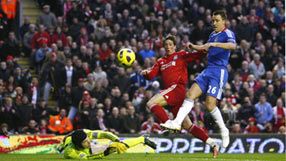 The Spaniard was back to his predatory best with two well-taken goals in the first half, inspiring Liverpool to their third successive league win following their dismal start to the season.

Arsenal failed to take advantage of the leaders' slip, however, as they were beaten 1-0 at home by Newcastle United courtesy of Andy Carroll's header late in the first half.

Manchester City did gain ground with Italian striker Mario Balotelli scoring both goals in a comfortable 2-0 win at West Bromwich Albion before being sent off in the second half.

The results squeezed the top of the standings with Chelsea still leading on 25 points, two ahead of Manchester United, who beat Wolverhampton Wanderers 2-1 on Saturday.

Arsenal and Man City have 20 with Newcastle up to fifth on 17 points. Liverpool, in the bottom three a week ago, jumped to ninth on 15.

It was just like old times for Liverpool with Anfield rocking and Torres ripping through Chelsea's defence.

The Spaniard, gradually regaining his sharpness, struck after 11 minutes when he collected a lovely ball from Dirk Kuyt and tucked it beyond Petr Cech and he doubled the lead just before half-time with a brilliant curler after cutting inside.

Chelsea, who had conceded only three goals in their previous 10 league games, upped their game in the second half with Didier Drogba joining the fray.

They generally controlled possession for the rest of the match but a late shot against the bar by Nicolas Anelka was their best effort.

"We are climbing the table, playing better every day," Torres told Sky Sports.

"We needed time to work with the new manager and the new players. Now we have to show we can play with the same intensity and quality against the teams in the middle of the table."

Arsenal dominated at Emirates Stadium but though they twice hit the bar through Cesc Fabregas and Theo Walcott they lacked the killer finish.

Arsenal goalkeeper Lukasz Fabianski was at fault for the goal when he was outjumped by Carroll, whose header looped into the empty net.

"It was a big disappointment because our performance was not good enough," said manager Arsene Wenger. "We knew on set pieces we couldn't afford these kind of mistakes."

Manchester City had suffered a mini-crisis when they followed league defeats by Arsenal and Wolverhampton Wanderers by losing to Lech Poznan in the Europa League.

However, they were always in control on Sunday and deservedly handed West Brom