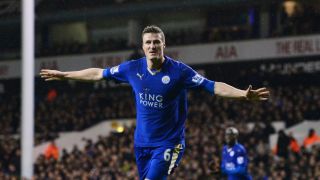 Just four days after contesting a full-blooded 2-2 draw in the FA Cup third-round on Sunday, the sides returned to White Hart Lane in a top-four Premier League battle.

And it was fourth-placed Tottenham who created the better opportunities on home turf with their top scorer Harry Kane - whose late penalty rescued a replay in the cup - hitting the crossbar in the second half.

Leicester, who named the returning Jamie Vardy in their XI after he missed the cup fixture due to minor groin surgery, had failed to win or score in their past three league matches.

But their late show in north London, coupled with Liverpool's 3-3 draw against Arsenal, means the east Midlands club are level with Arsene Wenger's men on 43 points, while Tottenham are now seven points off the pace.

After naming a much-changed team for the cup tie, the hosts reverted to type with seven changes and dominated the opening exchanges with Dele Alli - who penned a new contract with Spurs until 2021 on Tuesday - curling a low 25-yard effort wide of the right-hand post.

As has been the case so often this season, though, Leicester grew into the game and Shinji Okazaki shot wide on the turn after some sloppy Tottenham defending.

N'Golo Kante, one of just two players retained in Leicester's XI from Sunday, then rifled over from a tight angle before Danny Drinkwater's well controlled volley from the edge of the box drew a fine stop from Hugo Lloris.

Having weathered that mini storm, Tottenham finished the half strongly with Christian Eriksen's dipping effort parried well by Kasper Schmeichel.

Tottenham survived some early second-half pressure from Leicester to carve out the first opening after the break as Ben Davies' teasing low cross was met by Lamela and deflected wide.

Lamela was at the heart of Tottenham's next opportunity just after the hour when he brilliantly slipped Kane in behind the Leicester defence, but the England striker's effort was excellently saved by Schmeichel before bouncing agonisingly onto the crossbar.

More good work from Davies led to another Lamela chance with 15 minutes remaining, but the Argentine winger curled over the top from 10 yards.

But with seven minutes remaining Spurs were caught cold. Fuchs' excellent whipped corner was powerfully headed into the top left corner by the unmarked Huth much to the delight of the travelling supporters.