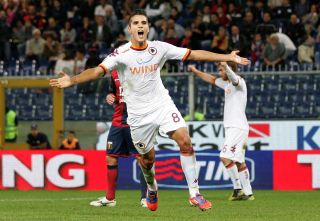 The Argentina international's arrival is likely to help fill the void left by Gareth Bale, who manager Andre Villas-Boas confirmed on Wednesday is close to completing a world-record switch to Real Madrid.

The 21-year-old enjoyed an excellent season with the Italian capital club last season, scoring 15 goals in 36 appearances as Roma finished sixth in Serie A, failing to qualify for Europa as they were also beaten in the Coppa Italia final by rivals Lazio.

He will now attempt to produce similar form this season for Spurs, who have agreed to pay an extra €5million if Lamela meets certain contractual objectives.

"AS Roma gives notice that it has agreed a deal with Tottenham Hotspur for the outright sale of Erik Lamela for a fee of €30 million," a club statement read.

"The agreement contains the recognition of a corresponding variable fee, up to a maximum of €5million, for bonuses linked to the player's achievements of certain sporting objectives."

The deal is unlikely to signal the end of Tottenham's business in the transfer market, with Steaua Bucharest defender Vlad Chiriches also expected to join the club before the end of the window.