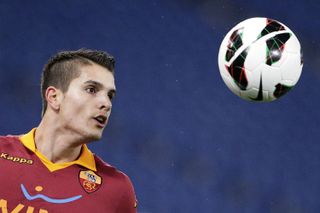 As Roma supporters listened to new coach Rudi Garcia promise that the team would make them proud this season during the club’s Open Day on Wednesday, the drone of a plane could be heard above the Stadio Olimpico. Sure enough, on looking up, those in the Curva Sud saw a small aircraft traversing the sky. A banner trailed from its fuselage. “The real truth,” it read, “is that we hurt you, 26.05.13.”

Everyone knew who was behind this stunt. It was their cugini, Roma’s cousins, Lazio. The date was that of last season’s Coppa Italia final, the first ever to be contested between the fierce rivals. Lazio had won 1-0 and how they have crowed about it ever since. Their fans held a mock funeral for Roma shortly afterwards on the nearby Milvio bridge. Senad Lulic, the Lazio full-back, also announced his intention to launch a clothing line called ‘71’; the minute in which he scored the winner.

There were boos and whistles as the plane passed. For a moment, Garcia must have thought they were directed at him, a touch ironic given one of his first statements as coach at the club’s pre-season training camp in Riscone di Brunico was to say that “anyone who protests Roma isn’t a Roma fan. They’re Laziali.”

The plane, incidentally, was a form of retaliation. Roma supporters had rented one themselves last Sunday and had it fly over the Olimpico during the Italian Super Cup between Lazio and Juventus with their own message imploring their neighbours to lift their heads and acknowledge “the immortal name… AS Roma.”

The problem with immortality in the Eternal City is that Romanisti will have to live with Lazio’s victory in the Coppa forever - or at least until they manage to avenge it. Two years after the club’s takeover by an American consortium, that loss represented a nadir. Roma had finished sixth in Serie A. The Coppa Italia final was their last hope of qualifying for Europe. For Lazio of all clubs to extinguish it was just too much to bear.

If all that wasn’t humiliating enough, after supposedly lining up either Walter Mazzarri or Max Allegri to replace caretaker Aurelio Andreazzoli, they got neither of them. The fans held protest after protest. There was a lack of confidence in owner James Pallotta. He wasn’t in Rome enough, they said. General manager Franco Baldini came under fire. He resigned. A rather damaging recording of a transfer strategy meeting chaired by director of sport Walter Sabatini, in which he discussed the need to sell two out of Marquinhos, Pablo Daniel Osvaldo and Daniele De Rossi was also then leaked.

It was an absolute shambles. Then things stabilised somewhat. First of all, Roma hired Garcia. After the idealistic appointments of Luis Enrique and Zdenek Zeman this was an appointment that struck a balance between romanticism and realism. Garcia’s Lille had played good football, the kind Roma aspire to play, but they’d also won things. He’d led the club to a first league and cup double in 65 years with players who had a similar profile to those he now has at Roma [Francesco Totti and De Rossi aside].

The sense was and remains that, although he’s the first Frenchman to coach in Serie A and is yet to learn the language, he’s a lot less flaky than his two immediate predecessors. Reassured by the prospect of Garcia on the bench, there was further encouragement to be found in the signings Roma were making.

Mehdi Benatia, one of the best centre-backs in Serie A over the last couple of years, joined from Udinese. Maicon hailed a taxi back to Italy, destination Roma. They were followed by Kevin Strootman, the PSV midfielder who has captained the Netherlands in Robin van Persie and Wesley Sneijder’s absence and had for a while been generating interest from Europe’s biggest clubs, including Manchester United. Aware of exactly how big a coup this was, 300 Roma fans gathered to welcome him at Fiumicino airport.

Gervinho’s arrival was even greeted with enthusiasm on the basis that a reunion with Garcia, his former manager at Lille, might well get him producing his best football again after two underwhelming years at Arsenal.

As for those who have left, few begrudged Roma taking €31.4m from PSG for talented young centre-back Marquinhos, only 12 months after paying Corinthians under €5m for him - only €1.5m of that up front. That was the sale of the summer.

Osvaldo’s exit was sadly inevitable. The fans had never accepted him. Sure he made mistakes - from slapping Erik Lamela in the dressing room in Udine to demanding he take a penalty when Totti was the designated taker against Sampdoria - but he didn’t deserve the sustained hate campaign he came under. Though willing to accept his share of the blame, Osvaldo was driven out. To put it a different way, Roma’s top scorer from last season was driven out of the club.

The supporters had got what they wanted. The club had too, if the leaked recording of the meeting to discuss transfer strategy was anything to go by. De Rossi was staying despite his wages hanging like a millstone around the club’s neck. Roma, it seemed, no longer needed to sell. They could look forward to the new season.

Over the last few days, however, there’s uncertainty again. Reports that Roma are in negotiations with Tottenham to sell Lamela have been met with despair. After Osvaldo, he was their next top scorer with 15 goals. Fast, elegant, quite ruthless at coming inside from the wing and curling a shot into the far corner, Lamela was electric last season.

Remember how, in the fall, he scored in six consecutive games. Only one player in the club’s history Rodolfo Volk had been on a longer streak. At only 21, Lamela represented the future of the team, a glimpse even of a post-Totti Roma. Featured on the club’s season ticket campaign, its slogan: “No one is hungrier than us” if that were really true and reflected their ambition, why sell the team’s most promising player? The answer to that question has been subject to great speculation.

Here’s one: After investing a lot in the team over the last couple of years, as well as agreeing a series of lucrative corporate sponsorship deals and announcing plans to build a new stadium thereby giving the impression that the club is in rude financial health, it’s often underplayed how after missing out on the Champions League once again [and Europe altogether], Roma’s American owners have come under a bit of strain. The obligations they have to Unicredit, the bank that is a 40% partner in the holding company they established to buy a 78% share of the club are often forgotten.

It was thought that selling Marquinhos and Osvaldo would ease the pressure, as did the exits of Maarten Stekelenburg to Fulham, and Bojan, who Barça bought back for €13m under the terms of the original agreement struck between the two clubs in 2011 before then sending him on loan to Ajax. Money raised from their departures gave the club room to breathe more freely again. Or did it?

Is selling Lamela a further case of Roma taking on oxygen? Is Baldini acting on this inside knowledge after taking up his role as Tottenham’s director of sport? Did a request to improve Lamela’s contract after a stellar season upset the apple cart? We don’t know.

Another explanation holds that Garcia isn’t of the opinion that Lamela is indispensable. He’s made it clear that, as far as he is concerned, the one player he’d be loathe to do without is Miralem Pjanic.

Considered absolutely fundamental to Garcia’s Roma, the French-speaking Bosnia international has quickly become one of his trusted lieutenants on and off the field. That’s all fine, but it’s hard to believe that a manager who has worked with the likes of Eden Hazard, and recognises great talent when he sees it, would be so quick to consent to the sale of a player of Lamela’s quality and potential, particularly on the eve of Roma’s season opener against Livorno.

It’s risky from Roma - their attack is suddenly very light. Osvaldo’s gone, Lamela’s expected to follow, last summer’s big signing Mattia Destro is perennially injured and Gervinho has everything to prove again. Is Totti expected to carry the attack on his 36-year-old shoulders? Of course not. Roma will bring in new personnel if Lamela leaves, but there’s less than a fortnight before the transfer window closes and besides, there’s been too much change anyway.

Over the last two years, Roma has been as much of a revolving door club as Genoa. Of the 12 players they bought for Enrique two years ago, nine are gone [it’ll be 10 if Lamela goes]. Another 11 or so were brought in last year. Is a third revolution in three years really what they need?  The decision to let the richly talented Nico Lopez, one of the stars of the Under-20 World Cup in Turkey this summer, go to Udinese as part of the Benatia deal when he’s perhaps capable of providing a similar spark to Lamela is another baffling one.

Lamela, incidentally, was at Roma’s Open Day on Wednesday. His presence left the club open to criticism amid the suspicion that he’s already a Tottenham player in all but name. “What a farce,” his girlfriend wrote on Twitter, before deleting her Tweet. Lamela scored a hat-trick in the training game at the Olimpico, each goal better than the previous one. As if the 30,000 in attendance needed reminding of how good he is, there it was in front of their eyes.

“Take your hands off Lamela!” read one banner in the stands. Alas in exchange for €30-35m Roma seem prepared to allow him to walk into Tottenham’s arms.