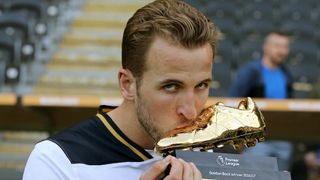 Harry Kane took pride in the "special" achievement of retaining the Premier League Golden Boot after scoring a second hat-trick this week in Tottenham's 7-1 hammering of relegated Hull City.

Kane netted four as Spurs put Leicester City to the sword 6-1 on Thursday and Mauricio Pochettino's second-placed side underlined there was no hangover associated with missing out on the title to Chelsea as they ran riot at the KCOM Stadium.

The England striker's first two arrived inside 13 minutes and he completed his treble as a dispirited Hull faded during the closing stages.

He amassed a haul of 29 goals in 30 Premier League appearances despite two separate injury absences, ensuring he finished ahead of Romelu Lukaku and Alexis Sanchez at the top of the standings.

"To win 7-1 away from home is a great end to a great season for us," Kane told BBC Sport after becoming the first player to retain the top-scorers' gong since Robin van Persie in 2013.

"It's massive to win the Golden Boot again. I said to retain it would be special with the injuries I've had but to score 29 goals in 30 games is something I feel proud of.

"Finishing the season with seven goals in two games is perfect, hopefully I can continue it at the start of next season. When you look at the players behind us, we have a fantastic team.

"We are delighted with the way we finished."