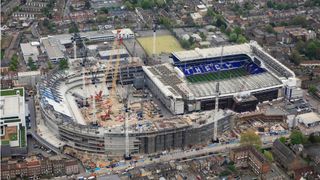 Tottenham have confirmed they will trump Arsenal after they were given the green light to expand the capacity of their new stadium beyond that of their rivals' Emirates Stadium.

Spurs will move grounds ahead of the 2018-19 season, with plans in place to play at Wembley next term as White Hart Lane – adjacent to the venue under construction – is demolished.

The new stadium was originally expected to have a capacity of over 56,000 seats, but the club have revealed that a change in design has enabled them to take the potential crowd beyond the Emirates' 60,432.

A club statement read: "Improved seating layout design has meant that we have been able to increase seating in several areas of the stadium. This will now see our official capacity rise to a total of 61,559.

The new stadium will be the largest capacity football club stadium in London. May 5, 2017

"The biggest gain will be in the single-tier South stand, which will now be able to accommodate 17,500 spectators, an increase of 500.

"The new stadium will be the largest capacity football club stadium in London."