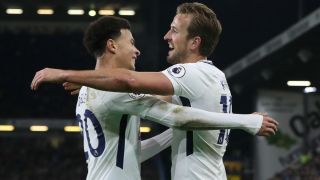 Tottenham chairman Daniel Levy insists the club will not sell any of their star players before the beginning of next season.

Star striker Harry Kane and midfielder Dele Alli have both been linked with some of Europe's elite clubs, with Real Madrid said to be eager to sign Kane in particular this year.

However, Levy says the club are under no pressure to cash in on their very best players before they move into their new stadium for the start of 2018-19.

"I'm 100 per cent confident. Every single player that we want to keep, I can assure you will be playing for Tottenham Hotspur next season," Levy told Sky Sports News.

The 55-year-old also confirmed Spurs will consider signing new players this month for manager Mauricio Pochettino, although he concedes the mid-season transfer window is difficult to navigate.

"Mauricio's strategy has always been that if an opportunity arises that he thinks can improve the squad then we will need to look at it, but January is always a very difficult window," said Levy.

Spurs host Everton in their next Premier League match on Saturday.