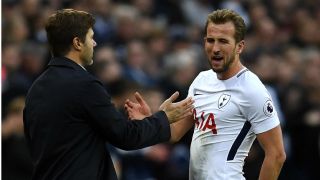 Mauricio Pochettino is running short of ways to describe Harry Kane following the Tottenham striker's imperious display in the 4-1 victory over Liverpool.

Kane scored twice and set up another as Tottenham ran riot at Wembley - Son Heung-min and Dele Alli also on target as Pochettino's side capped off a memorable week in style.

Tottenham sit third, five points behind Premier League leaders Manchester City, and Pochettino was quick to laud a superb display from Kane, also alleviating fears that the England forward had picked up an injury following his late substitution.

"He's tired, three games in one week and the effort was amazing from him," Pochettino told BBC Sport.

"Harry Kane is a fantastic player, one of the best strikers, it's difficult to find words to describe him - he's unbelievable, so professional.

"It was fantastic, a fantastic performance, the players were fantastic."

Tottenham had struggled to find a winning formula at their temporary home in the opening stages of the season, though managed a first win at Wembley in the league against Bournemouth last time out.

A brilliant away draw against Real Madrid in the Champions League followed before Sunday's demolition of Liverpool, and Pochettino now believes that his side are settled in at the national stadium as they aim to lodge a third successive title challenge.

"Many things were pleasing - the commitment of the players, the way that we played... Wembley starts to feel like home," added Pochettino.

"I am very pleased. Tuesday in Madrid was an amazing effort and so was this, so thank you to the players.

"Our fans were fantastic. It was an amazing game and we played really, really well. We tried to control the game despite conceding a lot of the ball.

"We were clinical and so aggressive. It is so important. We knew very well that Liverpool would try to play and the plan worked. They are a great team.

"It is the third season that we are trying to catch someone. Manchester City are doing very well, they have an amazing squad and one of the best managers in the world. We see what happens, we will try to catch them. We are focused every day."