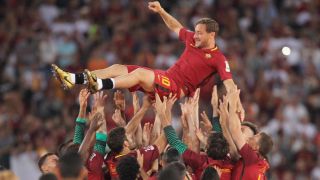 Real Madrid captain Sergio Ramos lauded Francesco Totti as one of the best of all-time and feels the Roma great could have played for any of the world's biggest clubs.

Totti, 40, made an emotional final appearance for the Serie A giants on Sunday, coming off the bench in a dramatic 3-2 win over Genoa.

Ramos believes Totti, a World Cup winner with Italy who has spent his entire career at Roma but is not yet ready to retire, was capable of featuring for any top club.

"I think Totti would've had no problem playing in another big club," Ramos said in a video posted by Roma.

"He's a born hitman and great players always find a way to fit into a team.

"When the list is made of the all-time best players, Totti will certainly be in there. I really believe he will be remembered as one of the greats."

Totti won one Serie A title, two Coppa Italia crowns and a pair of Supercoppa Italiana trophies with Roma.