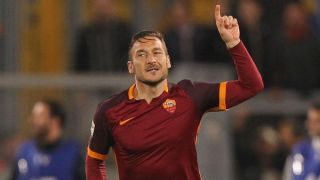 Francesco Totti hopes Roma can close the gap to Juventus in 2016-17 as he aims to end his career on a high.

The Stadio Olimpico side had to settle for third spot in the Serie A table last term, finishing 11 points behind Juve as the Turin club wrapped up a fifth consecutive Scudetto.

Totti has said he will remain at Roma for "one last season" after signing a one-year contract extension last month.

And the 39-year-old is eyeing improvements in his final year before he begins his role as technical director.

"We are always talking about objectives at the start of a season and you are always gunning for the maximum," Totti told the official Roma website.

"But we all know it will be difficult. We have a team ahead of us that has proven over the past five years that they are stronger and more competitive.

"We all hope that we can close the gap with Juventus and challenge for a major trophy.

"It's also my 25th consecutive season with the same team, which I don't think many other players have done.

"That's a great source of pride for me. I see beautiful things when I look back on my career.

"I've won trophies. Some say just a few, but I actually think we won quite a lot. I hope I'll be able to add some more silverware this last season too."