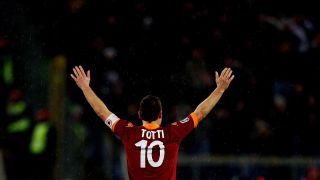 Rudi Garcia's men top the Serie A table with seven wins from as many matches and Totti has played a pivotal role in their superb start.

The 37-year-old has scored three goals and his form has been so impressive that Italy manager Cesare Prandelli revealed that he may try to coax him out of international retirement.

Totti, who earned 58 caps between 1998 and 2006, came through the youth system at Roma and made his debut in 1992, remaining at the club ever since, racking up over 500 appearances and scoring more than 200 goals.

That record has made him an idol among the club's supporters, while the likes of Bradley are in awe of him.

"Totti? He is a club symbol," Bradley told BBC Radio. "He is a symbol for every Romanista, for every fan. For every person that grew up in this city and hoped to become a professional football player.

"He is an idol, a symbol, an example. He obviously grew up in Rome, he won trophies in Italy, but the thing people have the most respect for is his loyalty.

"In a career where he was one of the best players in the world, with the opportunity to go and play for one of the biggest clubs in the world like Real Madrid, he always chose to play for this city, these colours, with his club.

"From this point of view he is a legend."

Bradley, a United States international, feels that the club made the right decisions over the close-season and that the appointment of Garcia was a masterstroke.

"I think the club did well in evaluating situations over the summer, deciding what players were needed and deciding which had a market in the transfer window," he said.

"Great work was done in picking the right coach, giving him the chance to work with players he wanted. Up to this point of the season, what you are seeing is the fruit of that work."