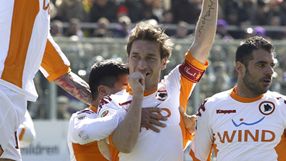 Following Milan's 1-0 loss at Palermo on Saturday, Giampaolo Pazzini's 52nd-minute strike was enough for a sluggish Inter to claim the three points against Lecce at the San Siro.

With eight matches left, the results mean Inter, at present trailing by two points, will go top should they defeat Milan in their next match - the derby coming up on April 3 following the break for international matches.

"The derby won't decide the title - there are 21 other points in play," Inter coach Leonardo, who replaced Rafael Benitez when the gap to season-long leaders Milan was 13 points, told Italian broadcaster Rai.

"It doesn't matter who is in better form going into the match because the derby is such a one-off. It's a difficult game to predict and especially strange to prepare for with the international matches."

Napoli, who appeared to have thrown away a shot at the title after losing to Milan 3-0 three weeks ago, closed to within three points of the leaders with victory in Sunday's late match.

Cavani opened the scoring from the spot four minutes into the second half after Ezequiel Lavezzi had been brought down in the box.

But Cagliari, thrashed 4-0 by Udinese last week, equalised seven minutes later through Robert Acquafresca's clever finish. Five minutes on though, Cavani slotted home his 22nd goal of the season to claim the points after a fine run from Marek Hamsik.

Fourth-placed Udinese are now just six points off the pace after a long-range effort from Swiss midfielder Gokhan Inler and a penalty from Antonio Di Natale, his 25th goal of the campaign, saw them defeat Catania 2-0 for their fourth straight win.

In Sunday's early match, Roma and Fiorentina played out an entertaining 2-2 draw at the Artemio Franchi stadium where Totti's second double in a week pegged back the improving visitors who had twice gone ahead in the first half through Adrian Mutu and Alessandro Gamberini.

The draw maintains coach Vincenzo Montella's unbeaten start in the league as Roma stay sixth, six points off the Champions League spots. Totti, now on 201 goals in Serie A, is within four of Roberto Baggio who lies fifth in the all-time list.

Inter, fresh from their Champions league success against Bayern Munich, began on the front foot against third-from-bottom Lecce with Wesley Sneijder testing goalkeeper Antonio Rosati before bending a free-kick into the side-netting inside the first 20 minutes.

With Lecce refusing to roll over, Inter moved up the gears at the start of the second half. Pazzini, moments after seeing a header saved, spun his man just inside the box and finished unerringly into the corner to give the home side victory.

On Saturday, Palermo halted their five-match losing streak to bring coach Serse Cosmi a debut victory with a 1-0 win over Milan.