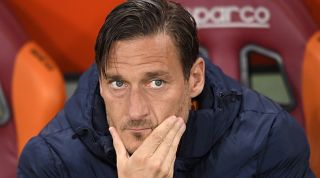 New Roma sporting director Monchi has claimed that Francesco Totti will retire at the end of this season.

The club captain and Italy great will become a director at Stadio Olimpico from 2017-18 onwards, Monchi has said.

"In terms of Totti, I already knew that there was an agreement with the club that this would be his final year as a player, then he'd start as a director," said the former Sevilla director, who was presented in his new role with Roma on Wednesday.

"Francesco is Roma, I want to be as close to him as possible. I'd love to learn even one per cent of the huge amount that he knows."

However, there is yet to be any confirmation from the player himself over his plans for next season.

The 40-year-old's future has been the subject of speculation throughout 2016-17 amid mixed messages from within the club.

General manager Mauro Baldissoni claimed before the derby defeat to Lazio on Sunday that Totti had agreed a contract to become a director from next season, although the player himself appeared to deny that anything had been decided.

"Somebody else might be saying that but not me," he said.