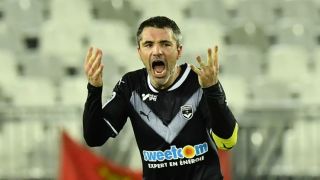 Jeremy Toulalan has left Bordeaux, the former France international cancelling his contract at the Ligue 1 club on the same day Jocelyn Gourvennec left his role as head coach.

Gourvennec departed on Thursday following a 2-0 defeat at home to Caen - Bordeaux's seventh loss in their last eight matches in all competitions - with Eric Bedouet put in temporary charge.

Toulalan, a two-time Ligue 1 champion with Lyon, signed for Bordeaux at the end of his Monaco contract in June 2016.

The 34-year-old requested an early end to his Bordeaux deal following Gourvennec's exit, with the club agreeing to let him leave.

"Whatever Jeremy decides to do next, everybody here at the club wishes him all the best," Bordeaux said in a statement.

"The image which will remain of him at Le Haillan is one of a first-rate player, a great professional and a good man who was much-loved by all members of the Girondins staff. Thank you and goodbye Jeremy."

Former Club Brugge boss Michel Preud'homme has been linked with replacing Gourvennec at the Matmut Atlantique, while star man Malcom is a reported transfer target for Arsenal.