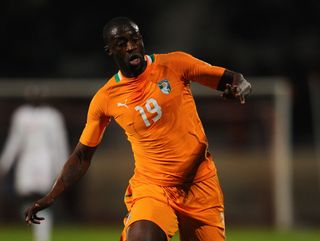 Toure becomes the second player to win the prestigious CAF award for a third year in a row after Cameroon striker Samuel Eto'o also achieved the same feat between 2003 and 2005.

National team coaches from the Confederation of African Football cast their vote to decide the winner and it was former Barcelona man Toure who claimed yet another honour in his illustrious career.

Toure played an integral role in ensuring his country qualified for this year's FIFA World Cup in Brazil.

The 30-year-old has also been outstanding for Premier League side City, who missed out on a trophy last season but are challenging for honours on four fronts in the current campaign.

Nigeria coach Stephen Keshi was a popular choice for the Coach of the Year award at the ceremony in his homeland, having masterminded his country's Africa Cup of Nations success in South Africa in addition to securing World Cup qualification.