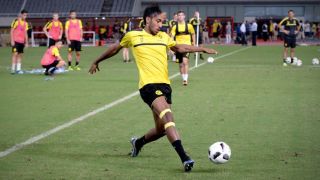 Pierre-Emerick Aubameyang says his words were twisted after he was quoted as stating he would only leave Borussia Dortmund for Real Madrid, while Thomas Tuchel is confident the striker will stay.

Aubameyang has frequently been linked with a move to the Santiago Bernabeu after revealing in an interview last year that he had promised his Madrid-supporting grandfather he would one day play for the club.

The Gabon international has been linked with big-money moves to the likes of Manchester City and Atletico Madrid, but was recently quoted in an interview with ZDF saying "the only club I would leave Dortmund for are Real Madrid".

However, Aubameyang, who this week flew home from Dortmund's training camp in China to be with his pregnant partner, claimed his words were not accurately represented.

In a post on social media, the 27-year-old wrote: "Hello journalists, just to be clear, I can read everywhere something that I never said 'only Real Madrid can take me from Dortmund'.

"I don't know who transforms my words but I'm sad that people do like [what] they want.

"I'm [a] player from Borussia Dortmund and in any interviews I was honest with you to say that it was my dream since I'm young, but not more."

Dortmund have already lost key pair Mats Hummels and Henrikh Mkhitaryan to Bayern Munich and Manchester United respectively ahead of the new season.

However, with Aubameyang tied to the club until 2020, head coach Tuchel has no doubt the striker will remain at Signal Iduna Park.

"I am totally confident [he will stay]," said Tuchel. "Auba has a long-term contract. He is very important for us and an outstanding goalscorer.

"More than that he is an exceptional character and he remains our player."