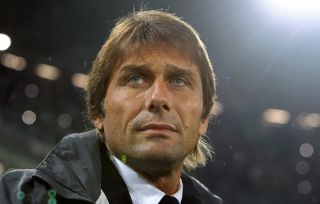 Conte, who played under Trapattoni at Juve, has guided the Turin club to successive Serie A titles since returning to the club in a managerial capacity in May 2011.

The 44-year-old former Italy international has recently been mooted in the media as a possible successor to Arsene Wenger at Arsenal.

But Trapattoni believes Conte is well placed to enjoy more success domestically and in Europe if he remains with Juve, who are third in Serie A behind leaders Roma and Napoli.

"I do feel ready to give him some advice: the longer he resists the fascination of trying a different league, the better," Trapattoni told Tuttosport.

"I too received offers from Italian and overseas clubs, but I preferred to postpone.

"I trained many different Juventus sides, but always thought the more you consolidate your success, the better.

"Of course, eventually I did go to four different countries and win.

"The Bianconeri have everything it takes to get back to the top of European football, though it's too early to tell how this season will pan out.

"They are having a perfectly normal wobble caused by the numerous matches, including internationals.

"Conte has benefited from experience, as he is coaching at the same club where he played for many years.

"The advantage is that he's more protected. Juve are traditionally subjected to criticism from all angles, but Turin is a city that clams up and protects during disappointments."

Trapattoni is out of work at present after his five-year tenure as Republic of Ireland manager came to end last month following a failure to qualify for next year's FIFA World Cup.

"I left Ireland without controversy," he said.

"We had important results together and had some satisfying moments.

"It's true we were unable to achieve qualification to the World Cup, but at the end of the day we said goodbye like civilised people.

"I got to know an exceptional country, humble and also proud. In a nation that doesn't have its own football league, I think I did a good job."