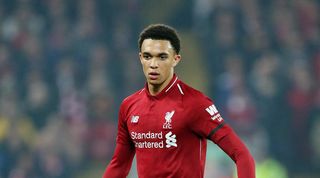 Liverpool right-back Trent Alexander-Arnold says he can envisage seeing out his career at Anfield.

The defender was enjoying another superb season before the Premier League was suspended until April 30 at the earliest due to the coronavirus pandemic.

Alexander-Arnold is now widely acknowledged as one of the best full-backs in the world, and most major clubs across Europe would be interested in signing him were he to become available.

However, the 21-year-old says he cannot imagine plying his trade away from the red half of Merseyside.

“I can imagine that,” he told GQ when asked if he might spend the rest of his playing days at Liverpool.

“[Playing abroad] is not something I’ve ever really thought about. I’ve always loved Liverpool. I’ve always supported them. I’ve always played for them. So, I’ve never had that reason to think about it.

“Yeah, still now, I wouldn’t sit there in my room and daydream about playing somewhere else. Right now, I’m a Liverpool player. I love the club more than anything. I love everything about it. I love the fans, the people. I love the city. So, no, why would I think about that?”

Alexander-Arnold was born in Liverpool and is the only local lad currently in the first team.

However, he still believes that his foreign team-mates are able to grasp what the club means to its supporters.

“It’s something I’m massively proud of, something I think comes with responsibility,” he added. “I don’t take it for granted, because I know it’s so hard to do it.

“It’s probably everyone in the stadium’s dream to be that person who’s in the team who’s from the actual city that they’re from and to be able to do that having been a fan growing up.

“I think they understand what the club is about, the history, this tradition, the values of the club. I grew up with it. I understood it from an early age. I was taught it throughout my childhood, whereas they weren’t.”

Liverpool are currently 25 points clear at the top of the Premier League table as they seek their first title since 1990.