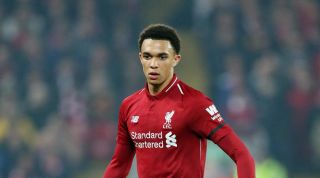 Trent Alexander-Arnold insists Liverpool are not solely focused on the Premier League this season.

The Reds are seeking their first chamoionship crown in three decades and their first of the Premier League era.

But Alexander-Arnold says Liverpool also want to go all the way in the Champions League, having won the tournament last season and finished as runners-up to Real Madrid in 2017/18.

“Keeping up the momentum we’ve got and trying to replicate 2019 as much as possible because, if we do that, I think more trophies will come," said of his goals for 2020 in an interview with the club's matchday programme.

“With the position we are in in the Premier League, if we can replicate what we did in the first half of the season then we will be in a solid position come May.

“Hopefully we can get to another Champions League final too, but we’ve got a difficult draw. Atletico Madrid are a stubborn team, one that’s hard to break down, and a passionate team with a passionate manager. It’ll be interesting to see the two managers on the touchline and see who is more passionate!

“We enjoyed the Champions League last year because we had such a tough run. Every game we had to get to the final was against a different type of opponent after a really tough group.

“We had a tough group this year and a tough round of 16 opponent again, but we like to be tested as a team because it brings the best out of us. If you want to be the best you have to beat the best, so for us it’s about testing ourselves as much as possible.

“Hopefully we’ll be able to go back to Istanbul [the venue for this season's Champions League final] again, which would be massive for the club, but to have a perfect 2020 we need to win as many trophies as possible.”