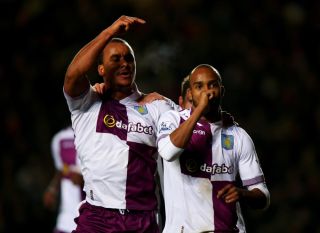 However, manager Paul Lambert is hopeful that all three will be available as Villa face Tony Pulis' men looking to end a run of three straight losses.

"There will be a good chance the three of them will be back next week," Lambert told the club's official website.

"We had Fabian missing against Fulham and Gabby (Agbonlahor) too and Karim, who has been playing really well of late. These are lads who have played a lot of the season."

In addition to Benteke's setback, Jores Okore sustained a ruptured anterior cruciate ligament in September and Libor Kozak broke his leg during training in January.

Lambert added: "It's been a big chunk of our squad. If you go through them - Jores has virtually missed the whole season, Libor has missed half a season, Christian is out for six months or so.

"There's been major, major injuries. It's not like they have been strains. These have been big injuries."

Villa have received positive news regarding striker Nicklas Helenius, who is nearing a first-team return and could resume training this week.

"Nicklas has had a thigh strain - an abductor strain," he continued. "He might begin training at the start of the week.

"He has had little injuries which have kept him out. But hopefully he will train this week."