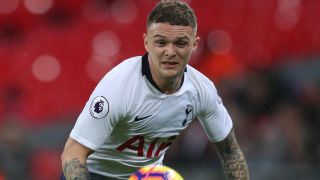 Tottenham full-back Kieran Trippier will have to deal with his groin problem for "a long time" and must learn to play through the issue, manager Mauricio Pochettino said.

Trippier, 28, made his first Spurs appearance in almost a month during Wednesday's 3-1 win over Southampton at Wembley.

But the England international came off late as the injury he suffered at the World Cup continues to trouble him.

Pochettino said Trippier was still struggling with the issue, but he urged the defender to battle through it.

"I think it's the same problem that started in the World Cup. The semi-final against Croatia, when he left the pitch and then he played after three days against Belgium, and now he is suffering," he told a news conference.

"We just needed to keep control of the game and get the three points." on tonight's win at Wembley.December 5, 2018

"Like today on the pitch, it wasn't in the best condition and his groin probably suffered more than when it's in a better condition.

"We need to care a lot about him, we need to protect him, he needs to care a lot to solve that problem. It will be a long time suffering with this type of problem because when I was in Argentina at 19 years old, it was difficult to solve then.

"He needs to start to accept the situation, and live with some pain, and play."

Harry Kane, Lucas Moura and Son Heung-min were on the scoresheet as Spurs moved into third in the Premier League.