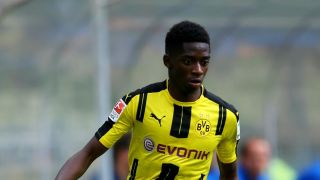 Borussia Dortmund coach Thomas Tuchel is satisfied with the integration of teenage striker Ousmane Dembele as his side continued their pre-season preparations with another win.

Friday's 5-2 victory over Erkenschwick was followed by a 2-0 win at Wuppertaler on Saturday, with Dembele scoring on his debut in the first match.

Adrian Ramos and Amos Pieper were on target for Dortmund at the weekend, with Dembele feeding Pierre-Emerick Aubameyang in the build-up to the opening goal.

Tuchel picked out Dembele for praise, with the 19-year-old standing out after his recent arrival from Rennes.

"Ousmane is a very modest, happy, young man as well as being an excellent footballer," Tuchel said. "He is someone who tries to integrate himself as fast as possible.

"These are all characteristics that are fun to see. If he then also plays like he has so far, then everything is good.

"If he doesn't watch the Euro 2016 final at Auba's [Aubameyang's] house tomorrow, he's more than welcome to come to my place. There will be grilled sausages without rolls."

Tuchel revealed Erik Durm is being rested as a result of an injury he sustained during the post-season break.

"He has been rested for the last four days and has undergone treatment," said Tuchel. "I expect him to take part in individual training tomorrow and to take part in team training on Tuesday.

"During his holiday he started to have problems when he went on runs and these problems reoccurred when he was made to do tests on Monday. That is why we rested him for a few days straight away."