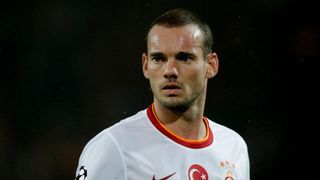 With three matches to go, Galatasaray lead the Turkish Super Lig by three points following their 1-0 victory over Mersin Idmanyurdu.

Hamza Hamzaoglu's men came into the latest round of fixtures with a one-point advantage over reigning champions Fenerbahce, with Besiktas a point further back in third.

However, the leaders have now extended their advantage after their success, combined with both Fener and Besiktas dropping points in their respective matches.

Yasin Oztekin struck the only goal of the game for Gala in the 16th minute, securing a fourth straight win - all without conceding a goal.

Fenerbahce, meanwhile, were held to a 1-1 draw at home to second-bottom Kayseri Erciyesspor.

The hosts took the lead as early as the second minute through Egemen Korkmaz, but they were pegged back four minutes later by Jacques Zoua and were unable to break down their stubborn opponents throughout the remainder of the game.

Besiktas were unable to capitalise on Fener's slip and move into a UEFA Champions League spot, as they too were held 1-1 at Akhisar Belediyespor.

They fell behind to Mehmet Akyuz's 14th-minute effort, and although Demba Ba levelled nine minutes into the second half, they were unable to find a winner and fell four points off the title pace.

Kayseri Erciyesspor's surprise draw at Fener means they retain slim hopes of survival. They sit joint-bottom, eight points adrift of safety after Rizespor ended a five-match losing run as Kyle Lafferty netted a late winner in their 2-1 victory at Gaziantepspor.

Balikesirspor remain alive at the foot of the table after their 3-2 success at Kasimpasa - Ermin Zec scoring twice for the strugglers – though 15th-placed Rizespor's win leaves them needing to overhaul an eight-point deficit in the final three games.

Karabukspor are six points from safety in 16th following a 2-2 home draw with Eskisehirspor.

Trabzonspor sit a point behind Istanbul Basaksehir in the race for UEFA Europa League qualification after both sides picked up victories.

Basaksehir came from behind to see off Sivasspor 2-1, which allowed them to leapfrog Bursaspor, who were defeated by Ozer Hurmaci's only goal of the game for Trabzonspor.